This last week I fixed some functionality bugs in my code.
I reworked the elevator code a bit.
I made the broken parts fade away.

Also for the credit scene, made all the animations  and interactions, and filled up my own office.

Skinned and rigged the boss, and implemented the ragdoll.

Sorry for the lack of images, but second night in a row with no sleep.

First of, I want to apologize for not posting last week.

I have been quite busy, but now I took the time to share my progress.

To start with, I redid the menu whole menu scene, taking the environment of the playable level, and using our final models. Redid the transition animations to match this scene and optimizing some things in the scene. I also added more feedback for the player to the radio. I also worked on fixing the pause scene, with help of Thomas who fixed the mouse/cursor issue.

As for the game-play, I added a flickering behavior when you get hit.

Also, the arms now follow the camera rotation, so that when you look up or down, your arms will follow.

To finish this up, I also looked already a bit in cleaning and reorganizing the assets in our project that were obsolete or not used. Further work will be done on this.

This week has been rather busy and hectic.

Added some performance to the breakable object script.

Fixed some other bugs around the game.

I also went over every model in max to reset pivot points and rotations to 0,0,0 and the scale to 100%. Made collision simplified collision mesh for every prop, and with those updated all the prefabs in game.

This week I was less focused on code, and more on art. After the implementation of the working animation in test scene I took some time to help the artists.

To start off with, I made the building: And to help the artist for making the floors, I made the Templates: 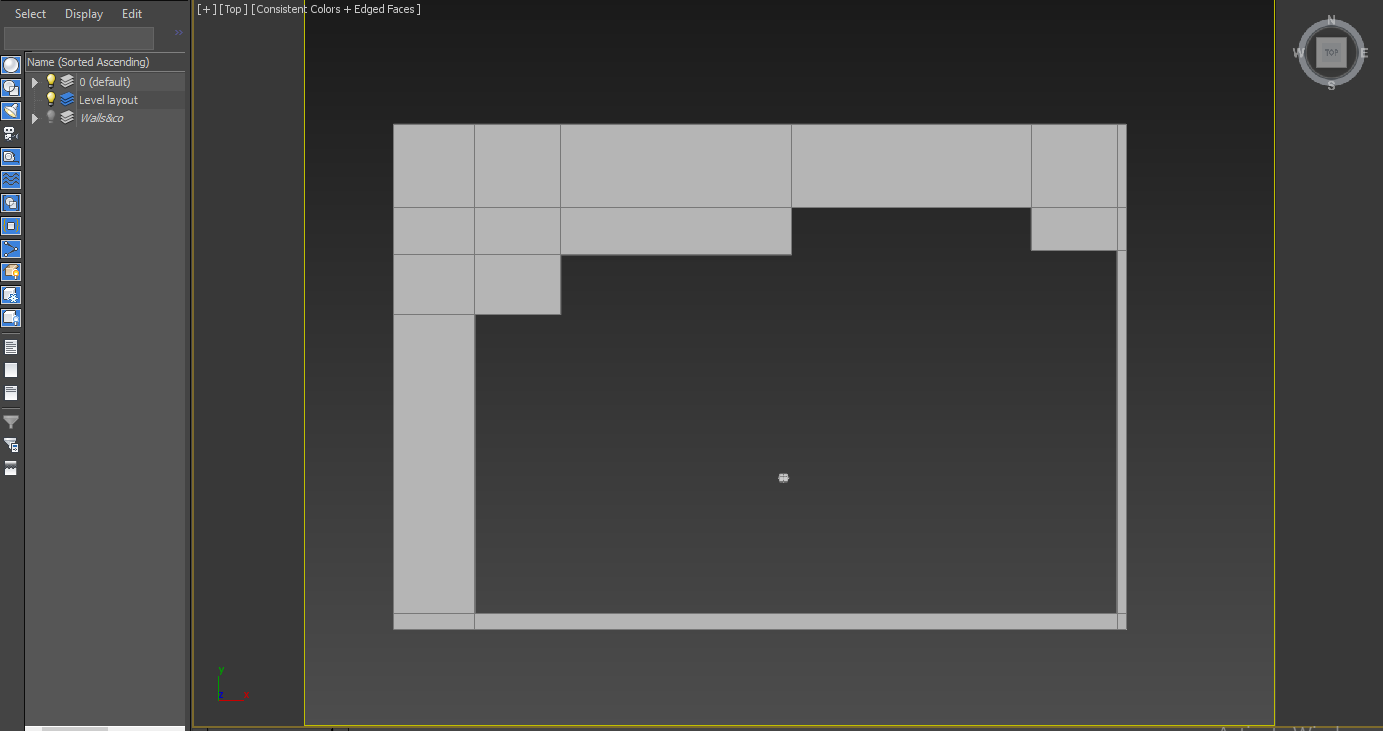 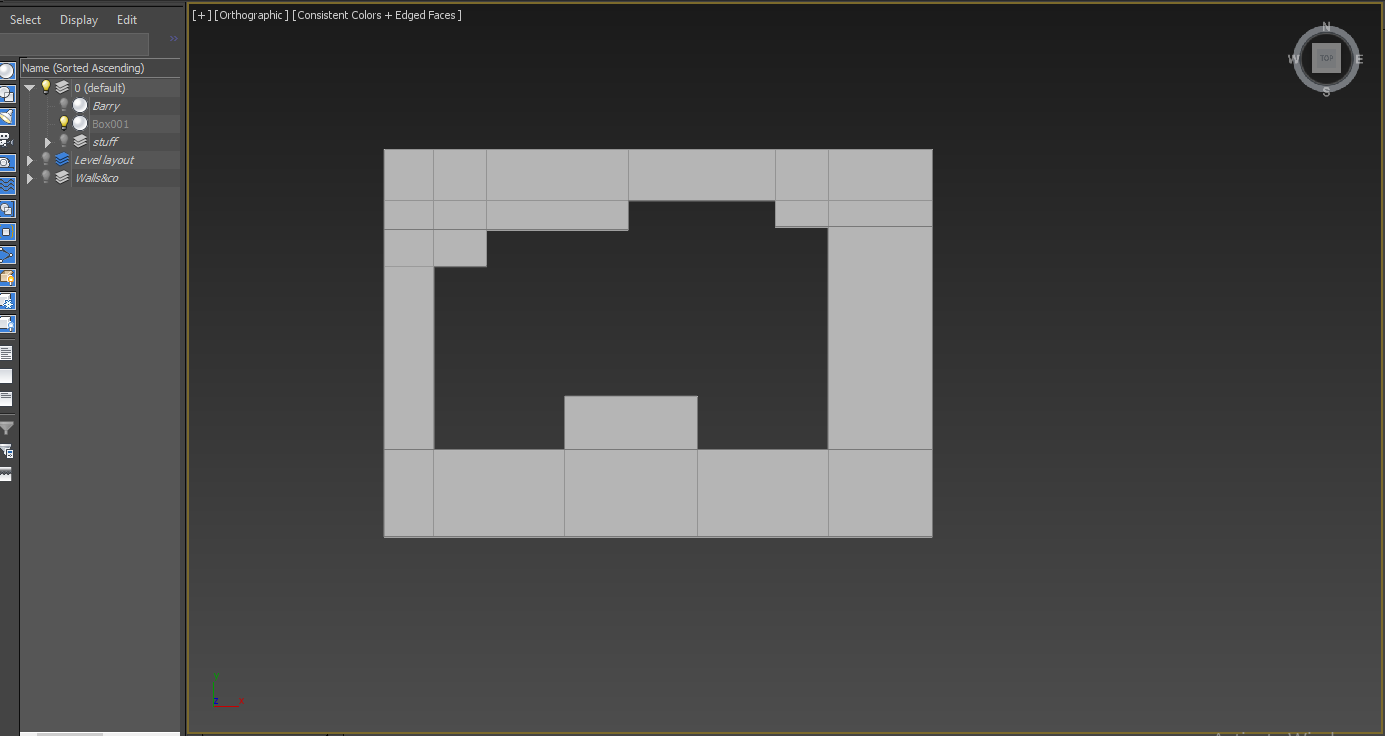 Also, to spare some time for the artist, after they did their level block out, so they could start the decoration process, I took care of fixing the inner walls, intersections, unwrap and so. I also took the time to redo the level I did last week in max instead: 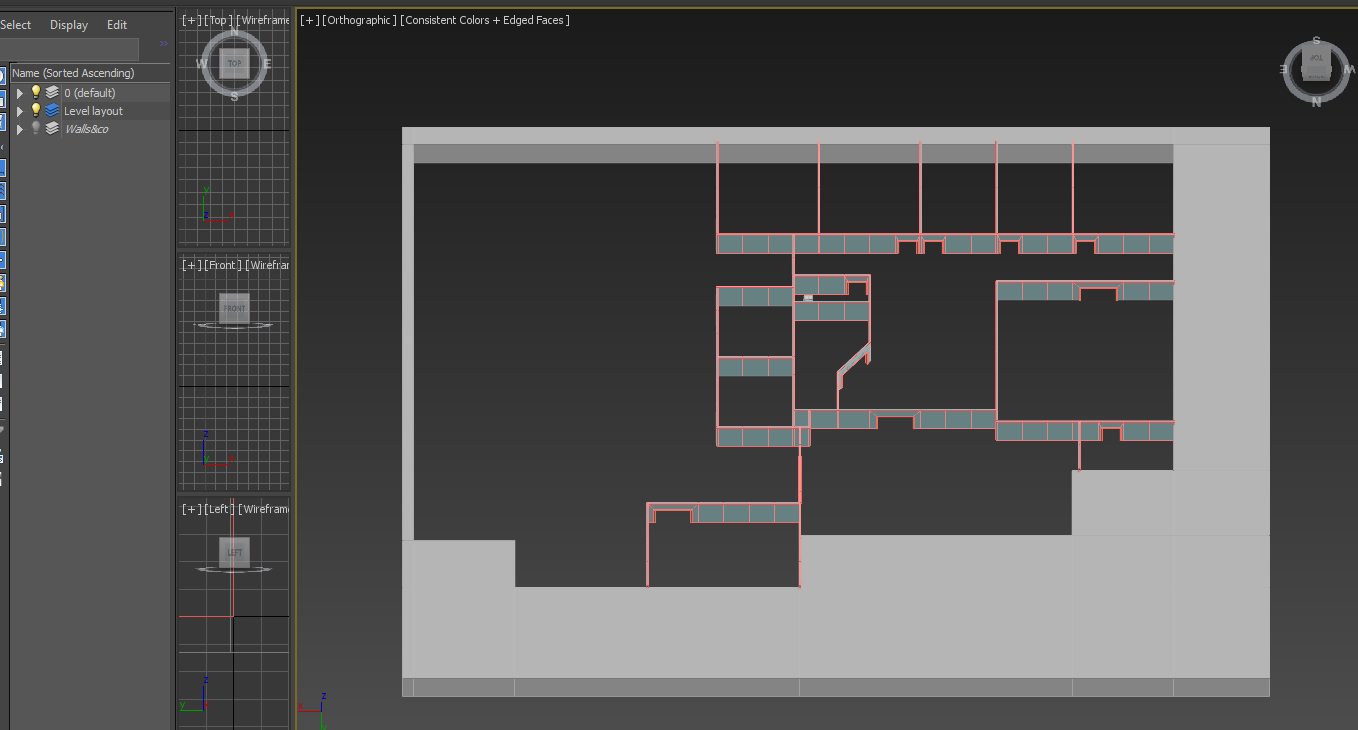 With the decorated levels of the artists, I helped myself decorate my own level. (way faster and easier to just copy and drag :p )

As final part of the level design process. I merged the scenes with the different decorated floors and restructured everything. Such as lights, props, and their transforms. While on it, I also fixed some prefabs and errors. (missing stuff, orientation issues, gravity issues) As result: (taken before fixing some issues, as you might notice in the second gif)

Shout out to the artists though, for making most of these props, and also making all the props breakable and making the prefabs, Also, for their decoration process to fill the level.

This week I added a little more props to the level. I also modeled an elevator. I’ll be adding independent controls for the elevators soon. The biggest change I implemented this week is working proper animation:

This week I worked a little less, due catching up of another course, on which I got behind due to illness and hospital appointments.

I started implementation code for cheat codes, but isn’t much at the moment.

I focused more on art this week, to help get some work of the artists, as they had a diorama assignment. As for the level, I’m slowly building up one of the floors of the first buidling: The end result should look a little like this (just a test building with elevators):

Note: each elevator will work individually once in game: for now they react to 0-1-2-3-4 according to the floor.

This week I have done again, quite some work.

For starters, shortly after finishing the elevator, I made an automatic door, it opens when AI or the player gets nearby, and remains open, until all AI and/or enemy have left the premises of the door. 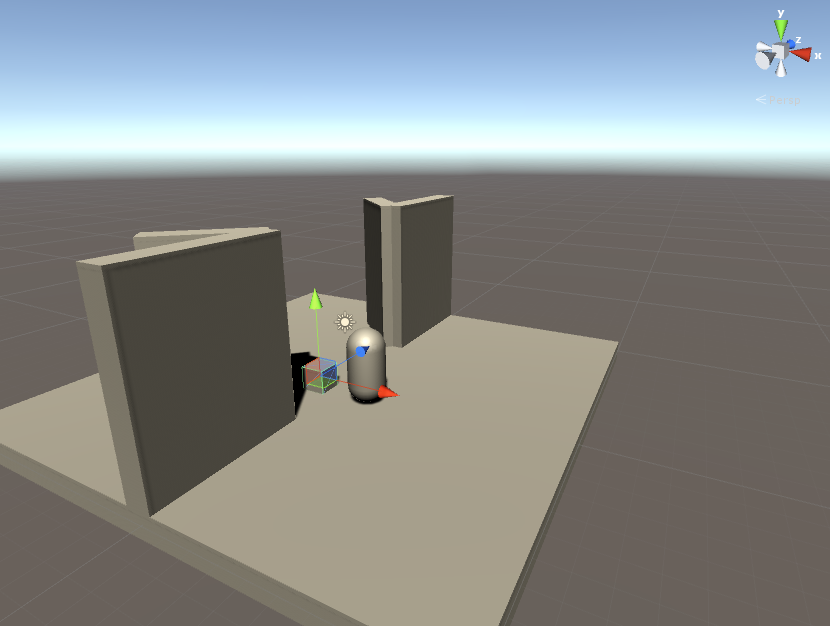 Next, I have also been focusing in polishing the main menu.

I improved the interaction scripts, visualized the scoreboard, interactive radio for audio settings and other settings as one hand/two hand weapon, and possibility of cheat codes. Also temporary implementation of graphics settings, made by a fellow programmer.

I also made some of the models: scoreboard, control display, post-it. Some of the other models, have been based on existing ones. As you might have noticed, the little guy statue, on which I just added, the foot, and made it interactive. Also the corner bookcase I made, has been based on the other bookcases of a fellow artist. I also made some variations on the existing bookcases, and a not corner version of the big bookcase. Also, added a little detail to the radio (speaker, bigger off and on buttons), which was also made by a fellow artist. Also made the unique textures for those props, and changed the mouse icon. Finally, I also have been working on improving the pause menu. This week I did quite some extensive work.

1.First off, as a remark of one of our teachers, I changed the two handed character interaction to one handed.

E to pick up left right handed weapon, which is actioned with the left mouse button.

Personally not so fond of it, but for now I commented out all the code, but I plan to add the possibility to choose between both  options in the future.

2.Next big change I added, is the interactive menu. Most of it is handled with animation through the animator.

The basic idea goes as follows:

3. The final thing I have been working on mainly today, is the  dynamic elevator. The inner door, and outer doors work with animation through the animator but the elevator itself works with hardcoded animation.

Only one animation clip is used, keys are changed according to the current position of the elevator, and the destination.

This week I worked on making pickable weapons glow and player feedback text show up.

I also reworked the hitting animation and changed some folder structure.

I also fixed the staplers orientation, so it can be used.