After filtering a lot of ideas, these are some of my favorite ones I came up with

In this game you play as an office employee who has the worst day of his life.
You’re wife has just left you, your car broke down, and to top it off, your boss won’t take it anymore and fires you.
After this happens the game commences, and you have to earn points by going on a rampage in the office, breaking as many things as humanly possible.
Can work with a time limit, power-ups, hostile co-workers, hostile police, weapons, …

In this game you play as a paper folded boat that is floating his way down a sewer system, that has to steer its way to the end of the level without taking too much damage. On your way you may encounter, whirlpools, other boats, rats, stones, cans, other garbage.
Collectibles and power-ups on your way can be found. 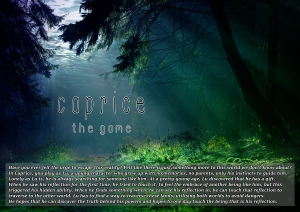 Caprice is a game concept I have designed for game preproduction.
A short explanation can be found on the picture above

You have a message that needs to be delivered to your friend/lover in the other class room, and it is urgent!
In this game you play as a paper plane that has been released into the air.  You have to pass several obstacles, avoid being seen mid air, and keep enough velocity to reach the person. Travel through hallways, airvents, cracks in walls, …